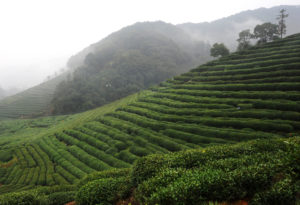 The Power and Goodness of Green Tea

The earliest Chinese literature indicates that the Chinese grew and used tea plants 3,000 years ago. In 2737 B.C., Chinese Emperor Shen-Nung placed camellia blossom tips into a cup of boiled water and pronounced the beverage healing and refreshing. Tea consumption increased around 200 B.C., popularized when it was said to cure the ailing troops of General Zhu Ge Liang (Kong Ming). During the Tang Dynasty (618-907), tea became an essential component of Chinese culture. Chinese author Lu Yu (733-804) at age twenty-eight published the book, Cha Jing (literally, The Book of Tea), systematically chronicling the planting, processing, preparation and consumption of tea. After the Tang Dynasty, tea plant seeds from China were spread into more than fifty countries. Today, tea is the most popular beverage in the world, with black tea accounting for 78 percent of the consumption and green tea most of the remainder. Tea production worldwide exceeds 2.9 million tons a year, with 80 percent produced in Asia. In the United States, tea consumption has increased 300 percent in ten years—the same time period that saw the country’s first decline in per capita cancer rates. An evergreen shrub called the Camellia sinesis is the common origin of all teas. Tea bushes cultivated for harvest are generally around three feet tall. Experienced tea pickers collect up to 70 pounds of tea a day by hand, and one tea bush will produce tea for at least 50 years. A single pound of tea yields about 180 cups of brewed tea. Tea boasts over 3,000 varieties, each with defining characteristics resulting from factors such as climate, soil and cultivation methods. Tea is harvested after the top two leaves and bud are hand-plucked, then processed into one of four types: black, green, oolong or white. Black tea, by far the most popular variety in America, is crushed, withered, fermented and dried. All teas, including black, have polyphenols, the wellness-packed compounds, but black tea undergoes a complete oxidation process that neutralizes the compounds. Black tea still has many healthful properties, including several important minerals, but green tea trumps its cousin hands down in the wellness arena. Green tea completely skips the oxidizing step and is simply heated, rolled and dried. The brief heating kills enzymes that would otherwise oxidize the polyphenols. The tea brews pale green/golden and has a delicate flavor that novices may perceive as slightly bitter, though it’s easy to acquire a taste for the beverage. Green tea-consuming Asians, in many ways, are healthier than Americans. They have less cancer of the mouth, colon, prostate and bladder; less cardiovascular disease; and less obesity and high blood pressure. They have less disfiguring rheumatoid arthritis, lupus and other autoimmune diseases in which the body inexplicably attacks its own tissues. They even have fewer wrinkles. Some diseases are virtually non-existent in China and Japan, such as xerostamia, or dry mouth, which affects fully a third of elderly Americans. The Japanese enjoy the longest lifespan of any country in the world. Their life expectancy of 82.2 years contrasts with an American life expectancy of 77.2 years. Japan has almost no natural resources, the workforce is under tremendous stress, the suicide rate is almost three times higher than in the United States and the Japanese consume more cigarettes per person. Yet on average, they still live five years longer than Americans. Asian and American cultures are different in so many ways that several things could conceivably account for these generalities. There is growing evidence that our health is greatly influenced by how we fuel our bodies. Green tea is an integral part of the Asian culture. Fully 98 percent of Japanese adults drink it regularly, as do a large percentage of Chinese. They have learned from centuries of folklore, anecdotal evidence and conventional wisdom that the beverage is good for them. For the past fifteen years, Dr. Hsu’s research has revolved almost exclusively around green tea and it is little army of chemicals that gobbles cancer cells and a complementary army that protects healthy cells. Green tea compounds can helps protect against inflammation and autoimmune disease seen in Sjogren’s syndrome, make cancer cells in a Petri dish disappear, inactivate viral particles such as Herpes, and regenerate skin cells and repair skin damage, including wrinkles and blemishes. The results are truly that astonishing, and we want the world to know and benefit from the products we develop. We want to confirm what Chinese folklore has been telling us for millennia. We want to show you green tea’s healing properties through our many natural products, without side effects. All are manufactured in FDA-approved facilities utilizing latest patented-pending green tea technologies. Most of all, we want you to live a long, healthy and happy life. For more information, please consult the book, Green Tea and Beyond, written by Dr. Stephen Hsu, et.al. Buy Now on Amazon.com